A granite ridge with three summits, the first being easily accessible in less than an hour while the rest of the ridge provides a stunning airy scramble. Also known as the ‘Trois Couronnes’ this mountain was an important mining area up until the beginning of the 20th century. 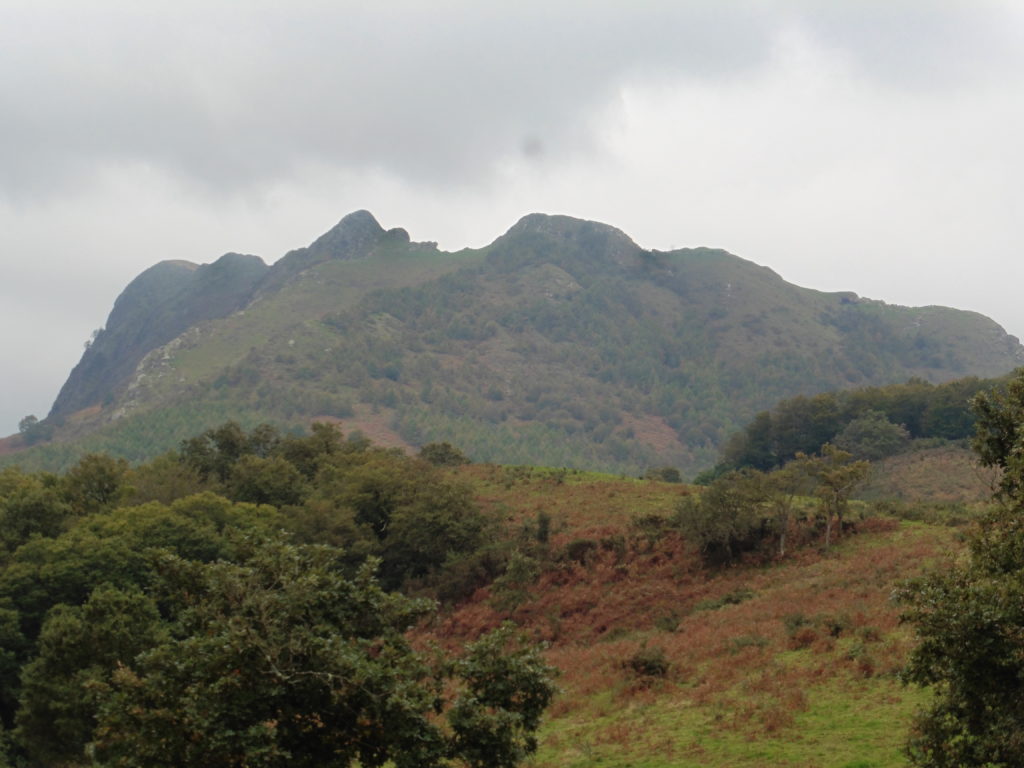 When coming from France, cross the border on the N10 at Behobia, and turn right towards Irun. After 1.7km go round the roundabout and back the way you came. After 50m take the first right, signed ‘Peñas de Aia’. The road goes under the motorway, up to a col with picnic tables, and past the ruins of the ‘Castillo del Ingles’ before arriving at a car park on the left, near a pylon. This is the Col d’Exurretxe.

Col d’Exurretxe 490m – Take the path up through the forest to the left of the pylon. After 10’ turn right up the hill at a signpost and then follow the fence line. Go up through fir and beech trees and past a wartime pillbox built as part of a defensive network along the border to prevent an invasion from the north. The path turns left and two long zigzags take you to the summit ridge which is straddled by a cave (760m). The path crosses over to the western side of the ridge where the cave contains a water source.

45’ – Cross back to the eastern side of the ridge. The main path skirts under the first summit but it is a short clamber up the slope to enjoy the fine views from the top of Irumugarieta. 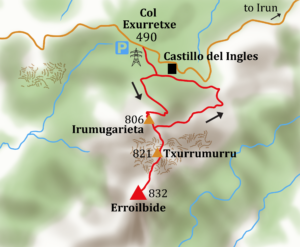 55’ Irumugarieta, 806m. – Go back down to the path and continue towards the next summit. Just after a cleft in the rock an awkward step is required to cross a gully. Leave the path at the next high point to scramble up rocks and then a steep eroded path to the summit of Txurrumurra.

1hr 10’, Txurrumurra 826m, statue of bird. Return the same way to rejoin the ridge path which then drops sharply. At 740m climb right over rocks following red marks. It is easy scrambling to start with though a bit exposed. The final awkward traverse down to the col is protected by a large ring. A rope should be used. Follow the ridge, with several sections that require scrambling, to the summit of Erroilbilde.

1 hr 45’ Erroilbilde 836m – Return along the ridge until below the northern summit. Drop down east on a path through forest and then an open grassy slope followed by more forest until the slope levels off and you encounter a path and signpost. Turn left towards ‘Arestegieta’. After a few hundred metres turn left at a junction. This is the GR121 (tour of Guipizkoa).

2hrs, 15’ Turn left and follow the white/red/yellow waymarks. Go over an old mining railway viaduct, built by the British Bidasoa Iron Company in the late 19th century to transport iron down to the coast. Pass the ruins of the mining office and accommodation at Castillo del Ingles (2hrs, 40’) and then turn left and up through the woods and back to the Col d’Exurretxe.