Visible from all along the coast the Rhune is an outstanding viewpoint whose summit is only somewhat marred by a huge antenna and three Spanish ventas providing refreshments to the many tourists who go up in the elegant wooden carriages of the rack railway. The route described here is a mountain cirque starting at the Gîte in Olhete. 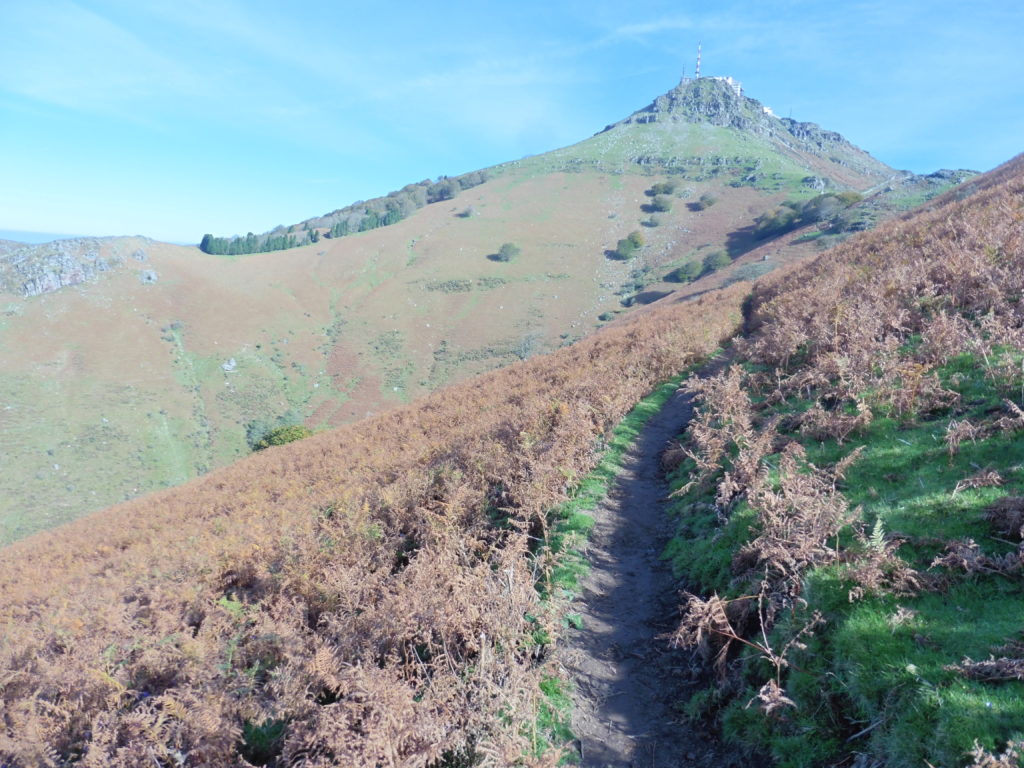 Leave the D44 west of Ascain at the first of the two roads opposite the Hotel Trabenea, signed ‘La Rhune’. After 500m the road ends at a car park in the forest.

Walk up the path at the end of the car park by the large ‘Depart’ sign. This is the GR10 which you follow as far as the ‘Col des Trois Fontaines’. Follow the red and white waymarks along the wide path up through deciduous forest. After 15’ the path emerges from the forest and continues south along the side of the ridge.

35’ Col, continue up the crest of the ridge and after 10’ veer right at a junction to flank the ridge again.

1 hr 25’ Col des Trois Fontaines 563m – Leave the GR and take the obvious path up SW between trees towards the summit of the Rhune. Follow the yellow marks or downward green arrows as you climb steadily up the stony terrain. Cross the railway track a few metres before the summit.

2hrs, 15’ La Rhune 905m Railway station, antenna and monument to the ascension of Empress Eugenie in 1859. Three ventas provide refreshments, the lowest one is open for walkers most of the year. Go down SE on the dirt road which soon turns back to the west and passes under the summit.

2hrs, 55’ Rock carvings in memory of the patriot Maurice Abeberry on your left, then the path skirts under the summit of the Petite Rhune until you come to a ridge which you follow down to a col where you veer left along the edge of a conifer plantation. The path joins another and then drop (slippery if wet) to the Venta Yasola.

4hrs, 30’ Gite de Olhette, which provides accommodation for long distance walkers. Cross the bridge over the river back to the car park. 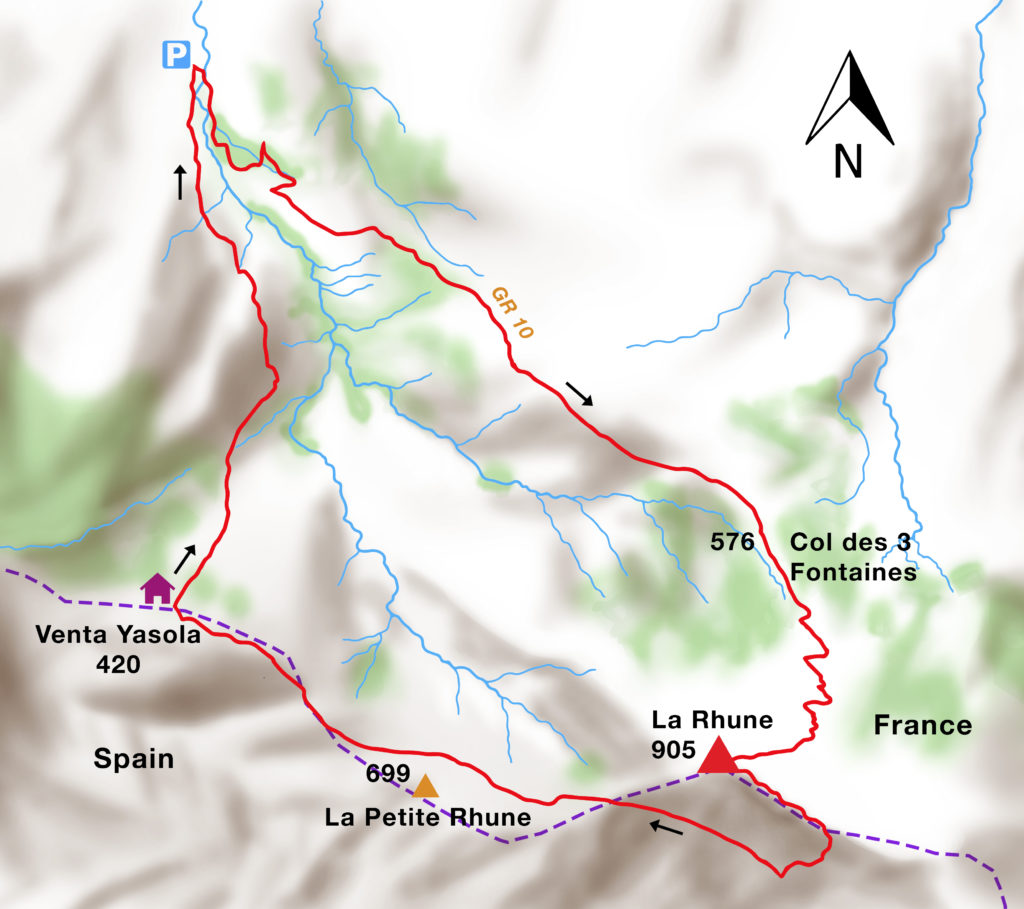 Empress Eugenie, the wife of Napoleon III, climbed the Rhune in 1859. The party travelled to and from Biarritz by horse carriage and then on the back of mules up the mountain, stopping for a large lunch half-way up. This was followed by dancing and an exhibition match of pelota and the party arrived on the summit at dusk. The monument to this event originally had a bronze eagle on the top but this was removed in 1940, to be used for German munitions. 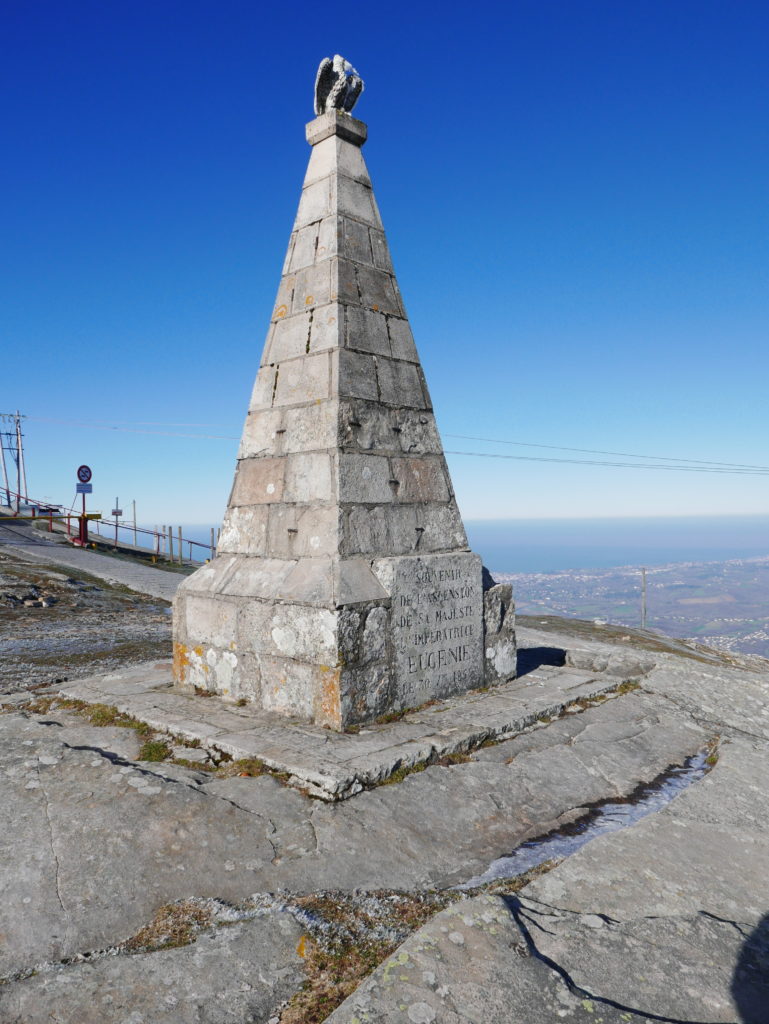